grimmstories.com | homepage | grimms' fairy tales | the knapsack, the hat, and the horn

The knapsack, the hat, and the horn Fairy tale

When he reached home, his brothers had built themselves a handsome house with their silver and gold, and were living in clover. He went to see them, but as he came in a ragged coat, with his shabby hat on his head, and his old knapsack on his back, they would not acknowledge him as their brother. They mocked and said, "Thou givest out that thou art our brother who despised silver and gold, and craved for something still better for himself. He will come in his carriage in full splendour like a mighty king, not like a beggar," and they drove him out of doors. Then he fell into a rage, and tapped his knapsack until a hundred and fifty men stood before him armed from head to foot. He commanded them to surround his brothers' house, and two of them were to take hazel-sticks with them, and beat the two insolent men until they knew who he was. A violent disturbance arose, people ran together, and wanted to lend the two some help in their need, but against the soldiers they could do nothing. News of this at length came to the King, who was very angry, and ordered a captain to march out with his troop, and drive this disturber of the peace out of the town; but the man with the knapsack soon got a greater body of men together, who repulsed the captain and his men, so that they were forced to retire with bloody noses. The King said, "This vagabond is not brought to order yet," and next day sent a still larger troop against him, but they could do even less. The youth set still more men against them, and in order to be done the sooner, he turned his hat twice round on his head, and heavy guns began to play, and the king's men were beaten and put to flight. "And now," said he, "I will not make peace until the King gives me his daughter to wife, and I govern the whole kingdom in his name." He caused this to be announced to the King, and the latter said to his daughter, "Necessity is a hard nut to crack, what remains to me but to do what he desires? If I want peace and to keep the crown on my head, I must give thee away."

So the wedding was celebrated, but the King's daughter was vexed that her husband should be a common man, who wore a shabby hat, and put on an old knapsack. She wished much to get rid of him, and night and day studied how she could accomplished this. Then she thought to herself, "Is it possible that his wonderful powers lie in the knapsack?" and she dissembled and caressed him, and when his heart was softened, she said, "If thou wouldst but lay aside that ugly knapsack, it makes disfigures thee so, that I can't help being ashamed of thee." - "Dear child," said he, "this knapsack is my greatest treasure; as long as I have it, there is no power on earth that I am afraid of." And he revealed to her the wonderful virtue with which it was endowed. Then she threw herself in his arms as if she were going to kiss him, but dexterously took the knapsack off his shoulders, and ran away with it. As soon as she was alone she tapped it, and commanded the warriors to seize their former master, and take him out of the royal palace. They obeyed, and the false wife sent still more men after him, who were to drive him quite out of the country. Then he would have been ruined if he had not had the little hat. But his hands were scarcely at liberty before he turned it twice. Immediately the cannon began to thunder, and struck down everything, and the King's daughter herself was forced to come and beg for mercy. As she entreated in such moving terms, and promised amendment, he allowed himself to be persuaded and granted her peace. She behaved in a friendly manner to him, and acted as if she loved him very much, and after some time managed so to befool him, that he confided to her that even if someone got the knapsack into his power, he could do nothing against him so long as the old hat was still his. When she knew the secret, she waited until he was asleep, and then she took the hat away from him, and had it thrown out into the street. But the horn still remained to him, and in great anger he blew it with all his strength. Instantly all walls, fortifications, towns, and villages, toppled down, and crushed the King and his daughter to death. And had he not put down the horn and had blown just a little longer, everything would have been in ruins, and not one stone would have been left standing on another. Then no one opposed him any longer, and he made himself King of the whole country. 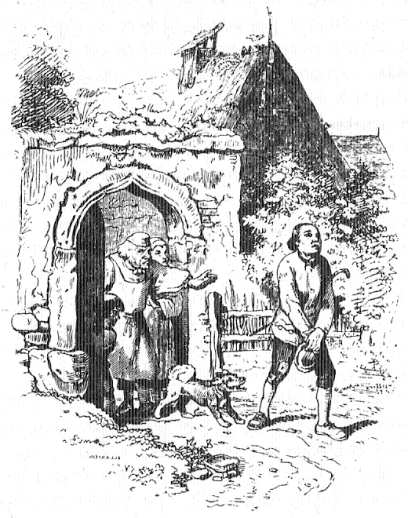 The nix of the mill-pond
Read the story →

The three feathers
Read the story →


Thank you for your support.