grimmstories.com | homepage | grimms' fairy tales | the mouse, the bird, and the sausage

The mouse, the bird, and the sausage - Grimm

The mouse, the bird, and the sausage Fairy tale

A fairy tale by the Brothers Grimm Grimm
9/10 - 232 votes
The mouse, the bird, and the sausage
Once upon a time a mouse, a bird, and a sausage formed a partnership. They kept house together, and for a long time they lived in peace and prosperity, acquiring many possessions. The bird's task was to fly into the forest every day to fetch wood. The mouse carried water, made the fire, and set the table. The sausage did the cooking.

Whoever is too well off always wants to try something different! Thus one day the bird chanced to meet another bird, who boasted to him of his own situation. This bird criticized him for working so hard while the other two enjoyed themselves at home. For after the mouse had made the fire and carried the water, she could sit in the parlor and rest until it was time for her to set the table. The sausage had only to stay by the pot watching the food cook. When mealtime approached, she would slither through the porridge or the vegetables, and thus everything was greased and salted and ready to eat. The bird would bring his load of wood home. They would eat their meal, and then sleep soundly until the next morning. It was a great life.

The next day, because of his friend's advice, the bird refused to go to the forest, saying that he had been their servant long enough. He was no longer going to be a fool for them. Everyone should try a different task for a change. The mouse and the sausage argued against this, but the bird was the master, and he insisted that they give it a try. The sausage was to fetch wood, the mouse became the cook, and the bird was to carry water.

And what was the result? The sausage trudged off toward the forest; the bird made the fire; and the mouse put on the pot and waited for the sausage to return with wood for the next day. However, the sausage stayed out so long that the other two feared that something bad had happened. The bird flew off to see if he could find her. A short distance away he came upon a dog that had seized the sausage as free booty and was making off with her. The bird complained bitterly to the dog about this brazen abduction, but he claimed that he had discovered forged letters on the sausage, and that she would thus have to forfeit her life to him.

Filled with sorrow, the bird carried the wood home himself and told the mouse what he had seen and heard. They were very sad, but were determined to stay together and make the best of it. The bird set the table while the mouse prepared the food. She jumped into the pot, as the sausage had always done, in order to slither and weave in and about the vegetables and grease them, but before she reached the middle, her hair and skin were scalded off, and she perished.

When the bird wanted to eat, no cook was there. Beside himself, he threw the wood this way and that, called out, looked everywhere, but no cook was to be found. Because of his carelessness, the scattered wood caught fire, and the entire house was soon aflame. The bird rushed to fetch water, but the bucket fell into the well, carrying him with it, and he drowned. 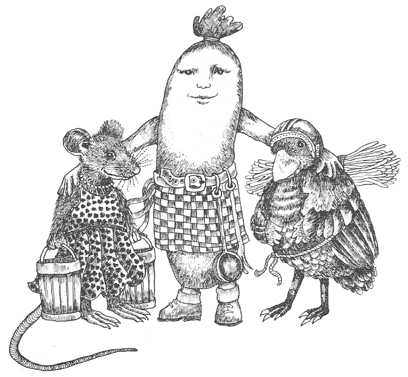 The giant and the tailor
Read the story →

Cat and mouse in partnership
Read the story →