The pack of ragamuffins - Grimm

The pack of ragamuffins Fairy tale

A fairy tale by the Brothers Grimm Grimm
8.8/10 - 189 votes
The pack of ragamuffins
The cock once said to the hen, "It is now the time when our nuts are ripe, so let us go to the hill together and for once eat our fill before the squirrel takes them all away." - "Yes," replied the hen, "come, we will have some pleasure together." Then they went away to the hill, and on it was a bright day they stayed till evening. Now I do not know whether it was that they had eaten till they were too fat, or whether they had become proud, but they would not go home on foot, and the cock had to build a little carriage of nut-shells. When it was ready, the little hen seated herself in it and said to the cock, "Thou canst just harness thyself to it." - "I like that!" said the cock, "I would rather go home on foot than let myself be harnessed to it; no, that is not our bargain. I do not mind being coachman and sitting on the box, but drag it myself I will not."

As they were thus disputing, a duck quacked to them, "You thieving folks, who bade you go to my nut-hill? Well, you shall suffer for it!" and ran with open beak at the cock. But the cock also was not idle, and fell boldly on the duck, and at last wounded her so with his spurs that she also begged for mercy, and willingly let herself be harnessed to the carriage as a punishment. The little cock now seated himself on the box and was coachman, and thereupon they went off in a gallop, with "Duck, go as fast as thou canst." When they had driven a part of the way they met two foot-passengers, a pin and a needle. They cried, "Stop! stop!" and said that it would soon be as dark as pitch, and then they could not go a step further, and that it was so dirty on the road, and asked if they could not get into the carriage for a while. They had been at the tailor's public- house by the gate, and had stayed too long over the beer. As they were thin people, who did not take up much room, the cock let them both get in, but they had to promise him and his little hen not to step on their feet. Late in the evening they came to an inn, and as they did not like to go further by night, and as the duck also was not strong on her feet, and fell from one side to the other, they went in. The host at first made many objections, his house was already full, besides he thought they could not be very distinguished persons; but at last, as they made pleasant speeches, and told him that he should have the egg which the little hen has laid on the way, and should likewise keep the duck, which laid one every day, he at length said that they might stay the night. And now they had themselves well served, and feasted and rioted. Early in the morning, when day was breaking, and every one was asleep, the cock awoke the hen, brought the egg, pecked it open, and they ate it together, but they threw the shell on the hearth. Then they went to the needle which was still asleep, took it by the head and stuck it into the cushion of the landlord's chair, and put the pin in his towel, and at the last without more ado they flew away over the heath. The duck who liked to sleep in the open air and had stayed in the yard, heard them going away, made herself merry and found a stream, down which she swam, which was a much quicker way of travelling than being harnessed to a carriage. The host did not get out of bed for two hours after this; he washed himself and wanted to dry himself, then the pin went over his face and made a red streak from one ear to the other. After this he went into the kitchen and wanted to light a pipe, but when he came to the hearth the egg-shell darted into his eyes. "This morning everything attacks my head, " said he, and angrily sat down on his grandfather's chair, but he quickly started up again and cried, "Woe is me, " for the needle had pricked him still worse than the pin, and not in the head. Now he was thoroughly angry, and suspected the guests who had come so late the night before, and when he went and looked about for them, they were gone. Then he made a vow to take no more ragamuffins into his house, for they consume much, pay for nothing, and play mischievous tricks into the bargain by way of gratitude. 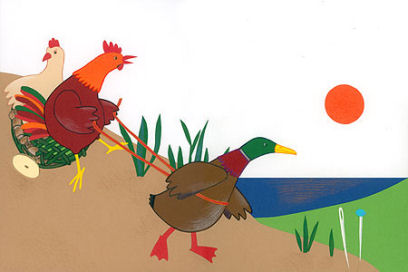 The thief and his master
Read the story →