A fairy tale by the Brothers Grimm Grimm
8.2/10 - 262 votes
The wonderful musician
There was once a wonderful musician, who went quite alone through a forest and thought of all manner of things, and when nothing was left for him to think about, he said to himself, "Time is beginning to pass heavily with me here in the forest, I will fetch hither a good companion for myself." Then he took his fiddle from his back, and played so that it echoed through the trees. It was not long before a wolf came trotting through the thicket towards him. "Ah, here is a wolf coming! I have no desire for him!" said the musician; but the wolf came nearer and said to him, "Ah, dear musician, how beautifully thou dost play. I should like to learn that, too." - "It is soon learnt," the musician replied, "thou hast only to do all that I bid thee." - "Oh, musician," said the wolf, "I will obey thee as a scholar obeys his master." The musician bade him follow, and when they had gone part of the way together, they came to an old oak-tree which was hollow inside, and cleft in the middle. "Look," said the musician, "if thou wilt learn to fiddle, put thy fore paws into this crevice." The wolf obeyed, but the musician quickly picked up a stone and with one blow wedged his two paws so fast that he was forced to stay there like a prisoner. "Stay there until I come back again," said the musician, and went his way.

After a while he again said to himself, "Time is beginning to pass heavily with me here in the forest, I will fetch hither another companion," and took his fiddle and again played in the forest. It was not long before a fox came creeping through the trees towards him. "Ah, there's a fox coming!" said the musician. "I have no desire for him." The fox came up to him and said, "Oh, dear musician, how beautifully thou dost play! I should like to learn that too." - "That is soon learnt," said the musician. "Thou hast only to do everything that I bid thee." - "Oh, musician," then said the fox, "I will obey thee as a scholar obeys his master." - "Follow me," said the musician; and when they had walked a part of the way, they came to a footpath, with high bushes on both sides of it. There the musician stood still, and from one side bent a young hazel-bush down to the ground, and put his foot on the top of it, then he bent down a young tree from the other side as well, and said, "Now little fox, if thou wilt learn something, give me thy left front paw." The fox obeyed, and the musician fastened his paw to the left bough. "Little fox," said he, "now reach me thy right paw" and he tied it to the right bough. When he had examined whether they were firm enough, he let go, and the bushes sprang up again, and jerked up the little fox, so that it hung struggling in the air. "Wait there till I come back again," said the musician, and went his way.

The wolf, in the meantime, had pushed and pulled and bitten at the stone, and had worked so long that he had set his feet at liberty and had drawn them once more out of the cleft. Full of anger and rage he hurried after the musician and wanted to tear him to pieces. When the fox saw him running, he began to lament, and cried with all his might, "Brother wolf, come to my help, the musician has betrayed me!" The wolf drew down the little tree, bit the cord in two, and freed the fox, who went with him to take revenge on the musician. They found the tied-up hare, whom likewise they delivered, and then they all sought the enemy together.

The musician had once more played his fiddle as he went on his way, and this time he had been more fortunate. The sound reached the ears of a poor wood-cutter, who instantly, whether he would or no, gave up his work and came with his hatchet under his arm to listen to the music. "At last comes the right companion," said the musician, "for I was seeking a human being, and no wild beast." And he began and played so beautifully and delightfully that the poor man stood there as if bewitched, and his heart leaped with gladness. And as he thus stood, the wolf, the fox, and the hare came up, and he saw well that they had some evil design. So he raised his glittering axe and placed himself before the musician, as if to say, "Whoso wishes to touch him let him beware, for he will have to do with me!" Then the beasts were terrified and ran back into the forest. The musician, however, played once more to the man out of gratitude, and then went onwards. 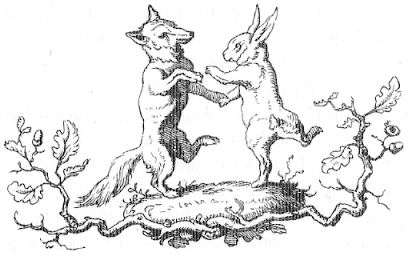 The lazy spinner
Read the story →