The elf of the rose
H.C. Andersen →

A little while after they were married, Hans said to his wife, "I am going out to work, in order to get money; you go into the field and cut the corn, so that we may have bread." - "Very well, I will do so, dear Hans," said she. And after Hans was gone she cooked herself some nice stew, and took it with her into the field. And when she got there, she said to herself, "Now, what shall I do? shall I reap first, or eat first? All right, I will eat first." Then she ate her fill of stew, and when she could eat no more, she said to herself, "Now, what shall I do? shall I reap first, or sleep first? All right, I will sleep first." Then she lay down in the corn and went to sleep. And Hans got home, and waited there a long while, and Else did not come, so he said to himself, "My clever Else is so industrious that she never thinks of coming home and eating." But when evening drew near and still she did not come, Hans set out to see how much corn she had cut; but she had cut no corn at all, but there she was lying in it asleep. Then Hans made haste home, and fetched a bird-net with little bells and threw it over her; and still she went on sleeping. And he ran home again and locked himself in, and sat him down on his bench to work. At last, when it was beginning to grow dark, Clever Else woke, and when she got up and shook herself, the bells jingled at each movement that she made. Then she grew frightened, and began to doubt whether she were really Clever Else or not, and said to herself, "Am I, or am I not?" And, not knowing what answer to make, she stood for a long while considering; at last she thought, "I will go home to Hans and ask him if I am I or not; he is sure to know." So she ran up to the door of her house, but it was locked; then she knocked at the window, and cried, "Hans, is Else within?" - "Yes," answered Hans, "she is in." Then she was in a greater fright than ever, and crying, "Oh dear, then I am not I," she went to inquire at another door, but the people hearing the jingling of the bells would not open to her, and she could get in nowhere. So she ran away beyond the village, and since then no one has seen her. 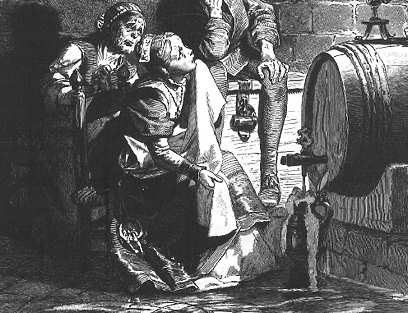 The white bride and the black one
Read the story →

The maid of Brakel
Read the story →

The tinder-box
Read the story →